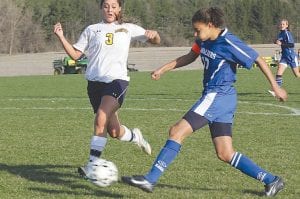 Shelby Marsh blows up her cheeks as she anticipates a collision with a West player earlier this season at the Optimist Courts in Lapeer.

FLINT TWP. — Home field advantage could give Carman-Ainsworth an advantage as several of the unknowns in the district were eliminated in the openers on Tuesday.

The Lady Cavs host the No. 15-1 district drawing the round-one bye. Davison, 9-2-1 overall, 5-0 league, which won its inaugural Saginaw Valley League-South title, took out Waterford Mott in the first round on Tuesday. Carman-Ainsworth now faces Davison in the semis today at 3 p.m.

“This is a tough district with Grand Blanc, Davison, Flushing, the two Waterford teams, it’s one of the toughest out there hands down,” said coach Jessyca Mathews. “We’re looking forward to the really good competition. Got the bye, so just looking forward to our opportunity to host and making the decisions to play our game against whoever we get.”

Clarkston eliminated Waterford Kettering in the other district opener on Tuesday and awaits the winner of Grand Blanc vs Flushing, 9-3 overall, 5-1 SVLSouth, which was delayed a day because of weather. That game took place at 1 p.m. yesterday after we went to press. The final is Saturday at 11 a.m. at Carman-Ainsworth. 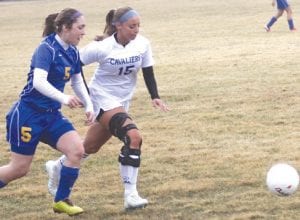