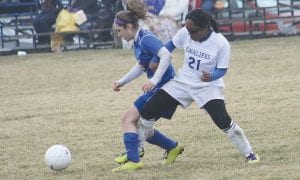 FLINT TWP. — Home field advantage may not matter for Carman- Ainsworth as it looks at the slate of opponents looking to knock it out of contention in the Div. 1 soccer districts.

The Lady Cavs host the No. 15-1 district drawing the round-one bye. That leaves Carman-Ainsworth, plenty of time to scout as they watch Davison, 9- 2-1 overall, 5-0 league, which won its inaugural Saginaw Valley League-South title to match up with Waterford Mott in the first round on Tuesday, May 28 at 6 p.m. at Davison. Carman- Ainsworth, x-x, x-x, gets the winner in the semis Thursday, May 30 at 3 p.m. at Carman-Ainsworth.

“This is a tough district with Grand Blanc, Davison, Flushing, the two Waterford teams, it’s one of the toughest out there hands down,” said coach Jessyca Mathews. “We’re looking forward to the really good competition. Got the bye, so just looking forward to our opportunity to host and making the decisions to play our game against whoever we get.”

Several unknowns lie in the Waterford schools, Kettering and Mott.

“Waterfords are the unknowns at this point, so everyone is going in blind against them, which could be good for us. We’ll just play our style and hope to come out on top if we get them.”

Clarkston takes on Waterford Kettering at 5 p.m. to open district play and Flushing, 9-3 overall, 5-1 SVLSouth, takes on Grand Blanc at 7 p.m. to decide who is in the other semifinal on Thursday, May 30. The final is June 1 at 11 a.m. at Carman-Ainsworth.