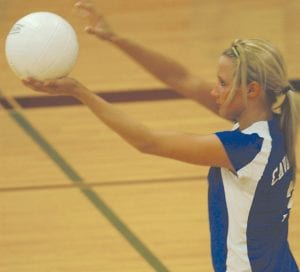 OWOSSO
— District No. 10-A, Owosso will be tough for the Carman- Ainsworth volleyball team in its quest for a district title. The Cavs started the season slow, but have peaked at the right time and are playing better than they have all year.

Carman-Ainsworth will face a big challenge in its opening round game when it faces Big Nine champion, Flushing. The Raiders have already beat the Cavs in their prior two meetings this season.

The Cavs got some revenge last Thursday when the team defeated Davison in the final Big Nine match of the year. With the win, the Cardinals and Cavs finished tied for second place in conference with a 3-3 record. Davison beat Carman when the two teams met earlier this season. Flushing won the league while Flint Powers finished last.

Once again, Kamrin Gold posted big numbers with 32 kills and 21 digs for the Cavs. Danielle McClung had 40 assists, 16 service points, 11 digs and five aces, while Aarin Townsend had 18 digs and nine kills, Kylie Schneider added 21 digs and Monica Townsend chipped in with 10 digs.

Carman-Ainsworth, 17-18-4 overall, 3-3 Big Nine, played a non-league match against Metro League foe, Holly last night and will participate in the Fenton tournament on Saturday before opening district play on Monday.