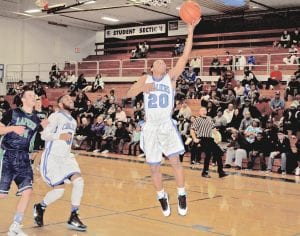 Ja’Kavien Lewis scored 12 for Carman-Ainsworth in the SVL championship finals last Friday at Davison against Saginaw.

DAVISON –The Carman- Ainsworth varsity boys’ basketball team was fresh off of winning the Saginaw Valley League-South when it faced Saginaw in the SVL title game last Friday at Davison. Despite the adversity of facing one of the top teams in the boys’ basketball arena, the Cavs came in hitting on all cylinders after recent victories over Midland and Flint Southwestern. That didn’t help, though, as Saginaw had a pair of new players who became eligible on Martin Luther King Jr. day that helped the Trojans win 75-58.

“We had already played them once this year and beat them by seven, but they had two guys who just became eligible. One was about 6-foot-6 and the other about 6-foot-3,” said Carman- Ainsworth coach Jay Witham. “Those two guys definitely had a major impact. Adding those guys made Saginaw a lot deeper and tougher, and it definitely showed.”

During the regular season Carman- Ainsworth won at Saginaw 63-56 on Jan. 8.

“What we were going to try and do was press them a little bit and see if we could get some easy turnovers out in transition,” Witham said. “That did not work for us, so we went to a man defense and we did OK with that against them but, defensively for the big guy, we were trying to force him to his left because watching film we didn’t see him going to his left very much. He ended up hurting us still going to his left. The other kid, we didn’t really know much about him. He got us for 14 (points).”

Even though the Cavs didn’t get the results they were looking for, the squad did have several highlights for the game. Ja’Kavien Lewis was forced to balance his team-high 12-points with ball-handling and defensive assignments that would’ve overwhelmed a lesser individual.

“We got down 17-6 at the end of the first quarter. We did show some poise and composure and at halftime the score was 32-30,” Witham said. “While we did battle back, when the chips didn’t go our way in the second half we kind of crumbled. Our mental toughness wasn’t there. Overall, our physical toughness wasn’t there, either. We allowed them to be tougher on the defensive rebounds than we were. That was disappointing.”

Saginaw’s other defining factor wasn’t quite so new to the Cavs. Ronquazius Southworth caught fire and scored a game-high 26 points, all of which Witham seemed to lament on one level or another.

“Adding those two guys makes Saginaw a lot better. They’re always one of the more dominating teams in the state year after year,” said Witham. “It was a good challenge for us before districts start. Now we’re just going to really fine tune our stuff. We watch teams on film and we have to make sure we know exactly where to be offensively and defensively.”

Class A district at Flushing

As for the upcoming districts which begin on Monday, Carman-Ainsworth (16-3 overall) has a bye for round one and will begin the tournament in the semifinals on Wednesday at 6 p.m. against Flint Metro League rival Swartz Creek (3-14), which also drew a bye for the opening round.

“We open up with Swartz Creek. They have some athletes and shooters to worry about. The other team would be Flushing, who is playing great basketball. Once again, they have some guys that can shoot and they are big to match up with our size,” Witham said.

The roster for the Cavaliers is a mixed bag of young and old that’s blended well this year. Terry Armstrong has been all over the floor this season while Michael Fletcher has been forcing opposing players to adjust or change their shot on a rather regular basis. Combine that with the experience of players like Ja’Kavien Lewis and Jaylen Bradley and the Cavs have the potential to go far in this tourney if it can get past their recent loss to Saginaw.

Armstrong is currently averaging 16 points a game while Duncan and Lewis are hitting for about 13 and 12 a night, respectively. Considering Fletcher is also averaging about 10 points per contest and all four players earned SVL honors this season, the formula for stopping this squad won’t be simple.

“Before the Saginaw game we were playing good team defense and sharing the ball. We still need to become more consistent shooting the ball and free throws. We need to be tougher,” said Witham. “We have to continue to play hard defense and rebound the ball, which allows us to create tempo for some easy baskets. When that doesn’t happen we need to be able to function in our half-court offense. We must also decrease our turnovers. These are all the intangibles that we can control.”