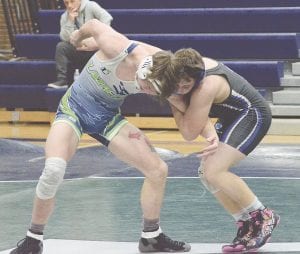 Jacob Durbin of Carman-Ainsworth, shown here in a match against Lapeer earlier this season, competed in the Div. 1 individual regional tournament at Clarkston this past weekend. Photo by Austin VanDaele

Durbin began his day with a loss to Lake Orion by fall in the quarterfinal before seeing his tournament come to a close with a loss by fall to Grand Blanc’s Eugene Durbin in the first consolation round.

For Bennett, his tournament started with a loss to Lake Orion by fall before defeating a Port Huron Northern opponent by fall at 2:23 in the first consolation round. In the consolation semifinal, Bennett lost by decision to Midland Dow.

Carman-Ainsworth’s season comes to a close as neither the team nor any individual wrestlers were able to advance to the state finals.