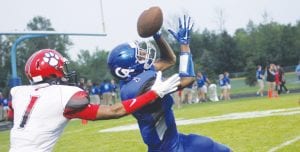 Carman-Ainsworth’s Cahlil Brownlee breaks up a pass near the sideline deep in his own territory against Grand Blanc in last Friday’s game at Cavalier Field.

FLINT TWP. – Carman-Ainsworth got off to a quick start in its football season opener last Friday but ultimately dropped a 21-14 decision to Grand Blanc in a non-league game at Cavalier Field.

The Cavs took a 7-0 lead less than five minutes into the game, but Grand Blanc scored the next three touchdowns to pull ahead for good and beat Carman- Ainsworth in the season opener for the first time since 2011.

Both teams employed no-huddle offenses in a fast-paced but mistake filled game that saw procedure penalties and other flags stall drives all night. Good defense also kept the score down, but both offenses helped with turnovers.

“Lots of missed opportunities,” said Carman-Ainsworth coach Jerry Parker, back at the Cavs’ helm for his second stint after coaching them from 2000-06. “We had a couple of dropped interceptions maybe, and a dropped pass that would have been six. We had our opportunities. We just have to keep battling and get better.”

Carman-Ainsworth stopped Grand Blanc’s opening possession with an interception and took a 7-0 lead on a 1-yard touchdown run by Jalen Lewis with 7:21 left in the first quarter.

Grand Blanc countered with a 9-yard touchdown pass from Zach Leedom to Dennis Smith with 1:03 left in the first, but a two-point conversion run failed, leaving Carman-Ainsworth ahead 7-6 at the quarter break.

The Cavs had another interception early in the second quarter, this one by Cahlil Brownlee at his own 31, but they couldn’t capitalize. Grand Blanc got the ball back and drove down the field, keyed by a 38-yard run by sophomore Lamar Hay to the Carman-Ainsworth 8-yard line. Leedom took it in from the 7 on fourth-and-goal, and Hay ran in the two-point conversion to give the Bobcats the lead for good at 14-7 with 5:45 left in the half.

Another Carman-Ainsworth interception with 10 seconds left in the third quarter set up the Cavs’ second touchdown. Josh Jackson hit Brownlee with a 27-yard scoring strike to make it 21-14 with still 11:47 left in the game. Brownlee made two dazzling moves on the play to get to the end zone.

But the Cavs didn’t come close to scoring again, suffering a sack at their own 16 on third-and-8 and throwing a game-clinching interception with 39 seconds left.

Carman-Ainsworth will open Saginaw Valley League with a home against Mount Pleasant at 7 p.m. Friday.