Cavs fall to Bobcats in season-opener 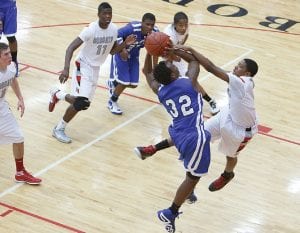 GRAND BLANC — The Carman- Ainsworth boys’ basketball team opened the season on Tuesday at Grand Blanc, but was a bit undermanned as junior point guard Denzel Watts sat due to disciplinary reasons. The Bobcats did not feel sorry for the Cavs, though, as they were missing Bart Williams, who was out with a concussion.

Grand Blanc was able to hold a six-point lead at the half, 26-20, and held on in the second half to claim the season-opening victory over the Cavaliers, 55-49. Carman led 14-12 after the first quarter.

Cameron Morse and Justin Person led the way for Carman with 15 points apiece and Cortney Weatherspoon added 14. The Bobcats were led by Kenneth Miller with a game-high 20 and Clarence Turner added 11.

“Our play was inconsistent, Grand Blanc outworked us for a lot of the game,” Carman- Ainsworth coach Bob Root said. “We allowed far too many open looks for three-point shots. We got out-rebounded and turned the ball over too often. We had only one player with prior varsity playing experience, Cameron Morse, and it showed. Our players must learn to play at the intensity level of varsity basketball.”

The two teams will meet again on Jan. 3 at Carman. The Cavs, 0-1 overall, host Howell tomorrow and travel to Clarkston on Tuesday.