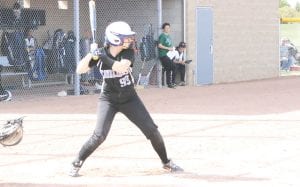 LAPEER – The Carman- Ainsworth softball program was handed a 14-6 loss at Lapeer last Thursday. The Cavaliers took a 4-0 lead after just one inning, but Lapeer began to chip at the lead with a 2-0 second inning.

Each team scored once in the third before Lapeer began to pull away. The Lightning scored three runs in the third and then four runs in both the fifth and sixth innings. Carman- Ainsworth added one run in the seventh, but it was too late to mount a comeback.

The Cavaliers lost both ends of the twin bill, 11-0 and 18-0, at Bay City John Glenn last Wednesday. Each game ended after five innings.

Carman-Ainsworth was slated to be at Birch Run on Monday, but details were not available. The Cavs hosted Bendle after yesterday’s deadline. – B.P.