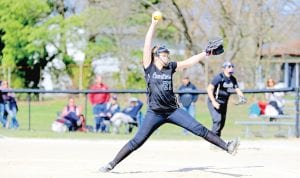 Carman-Ainsworth’s Madison Cox goes through her pitch motion against Lapeer in a rescheduled game from last week.

FLINT TOWNSHIP – At home on Tuesday in a Saginaw Valley League makeup game, the Cavaliers lost to Lapeer, 12-2. Both Carman-Ainsworth runs came in the sixth inning while Lapeer added four in the third and three in the fourth to add some breathing room.

The Lady Cavaliers hosted Mt. Pleasant on Monday in Saginaw Valley League action, losing both games to the Oilers, 9-3 and 10-0. Individual stats were not reported.

“We had some errors but played hard and made some boom-boom plays,” said Carman-Ainsworth coach Joy Roe. “I was proud of them.” – B.P.