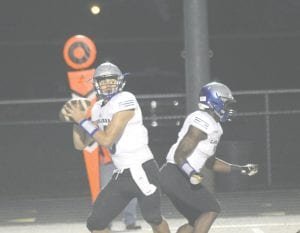 LAPEER – The Carman-Ainsworth varsity football team jumped out to an early lead, but ultimately fell to Lapeer 35-23 during last Friday’s road matchup. The Cavs opened the scoring for the game with a 22-yard field goal from Mohamed Farhan in the first quarter to lead 3-0.

In the second quarter, Carman- Ainsworth connected on a 17-yard touchdown pass from Dustin Fletcher to Tanayshio Dones to lead 10-0 before Lapeer ran it in from three yards out for its first score. Following the Lightning touchdown, Carman-Ainsworth made good on a 55-yard interception from Marshall Brooks and scored to lead 16-7 following a missed extra point. Lapeer would score once more on an eight-yard touchdown pass to narrow the gap to 16-14 at the half.

Both teams scored one touchdown in the third quarter to bring the score to 23-21 headed into the fourth. Jalen Smith ran the ball 16-yards to the house for the Cavs while Jalen Kirkland of Lapeer landed in the end zone following a one-yard scamper. Lapeer then scored two unanswered rushing touchdowns in the fourth to secure the victory and hand the Cavs their fourth loss of the season. Individual game stats were not reported.

Despite the loss to finish 5-4 on the season, Carman-Ainsworth was selected to compete in the postseason and will face off with Fenton, 8-1, for its first-round game tomorrow at 7 p.m. at Fenton High School. The winner will advance to play either Flushing, 7-2, or Lowell, 6-3, next week.