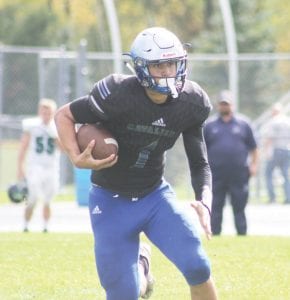 Dustin Fletcher of Carman-Ainsworth rushes to gain yardage during a game against Lapeer on October 6. Photo by Joe Oster

FLINT TWP. – The Carman- Ainsworth football team saw its season come to a close in a 31-7 loss to Flint Powers Catholic at home last Friday.

Powers struck first with a two-yard scamper to go ahead 7-0 and never looked back for the remainder of the game. The Cavs responded with a 39-yard touchdown run from Chris Coleman with a successful extra point to tie the game, but that would be the final time Carman-Ainsworth put points on the board.

Powers regained the lead in the second quarter with a 27-yard field goal to go ahead 10-7 before scoring on a 38-yard rush to lead 16-7 at the half.

Following the break, the Chargers scored on a one-yard scamper in the third and on a two-yard carry in the fourth to secure the big win.

Carman-Ainsworth narrowly trailed Powers in overall yards gained for the contest, picking up 364 compared to Powers’ 400, but turnovers proved to be the Cavs’ downfall with three interceptions and one lost fumble. Dustin Fletcher finished the game 13-for-31 passing with 191 yards. Coleman led the Cavs in rushing with 71 yards on six carries, followed by Dustin Fletcher with 40 yards on eight carries. Rolaunde McCree led all receivers with five catches for 83 yards. Coleman caught three passes for 44 yards and Idris Bray had two catches for 26 yards. 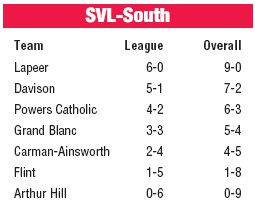 Carman-Ainsworth finishes its season 4-5 overall, failing to make the playoffs for the first time in three seasons.