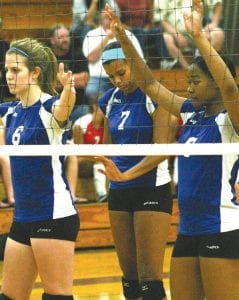 FLINT TWP. — The Carman- Ainsworth volleyball team fell to Flushing last Thursday in three games, 25-17, 25-13, 25-10. The Big Nine opener marked the 49th straight league victory for the Raiders dating back to Feb. 2, 2006 when they lost to Davison.

Flushing has won six straight Big Nine titles and it looks as if they are on their way to number seven. The Raiders have been to the state quarterfinals three times in the last five seasons.

Danielle McClung led the Cavs with 18 assists, while Kamrin Gold was held in check by the Raiders, finishing with just 11 kills.

On Saturday, Carman-Ainsworth traveled back to Flushing for the Flushing Invitational and lost in the gold bracket quarterfinals to eventual champion, Farmington Hills Mercy, which is ranked No. 1 in Class A, 12- 25, 16-25.

Gold rebounded with an excellent tournament, as she came through with 48 kills and 35 digs, Monica Townsend added 35 digs and McClung chipped in with 52 assists. 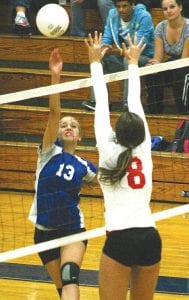 Carman-Ainsworth’s Jessica Smith (#13) tipped a shot over the net around the block.