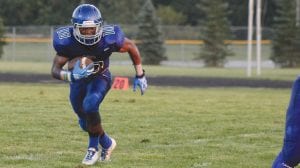 FLINT TWP. — Carman-Ainsworth absorbed its first football loss of the season last Friday, but the Cavaliers might be better off for the experience in the long run.

The Cavs bowed to Bloomfield Hills Brother Rice, 31-6, in a non-league game at home, but they got a first-hand look at a state championship-caliber program. Brother Rice has won the last two Div. 2 state crowns and eight overall.

Carman-Ainsworth has returned to the playoff scene under coach Nate Williams, but the Cavs have been knocked out in the first round the last two years. That’s why they’ve scheduled powerhouses like Brother Rice.

“We want to someday become a state championship team, and in order to do that you have to beat the state championship-caliber teams,” Williams said. “I feel every week we’ll be preparing for the playoffs because we’re playing playoff teams. So, hopefully, by week 10 we’re ready for that long road.” 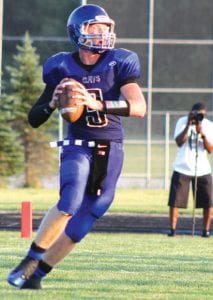 Carman-Ainsworth’s Connor Storms rolls out against Grand Blanc during week one.

Carman-Ainsworth, 2-1, played Brother Rice, 3-0, to a scoreless standoff in the first quarter, but the Warriors started clicking in the second. Jason Alessi kicked a 23-yard field goal just three seconds into the period, then Shon Powell scored on an 11-yard run at 8:12 and Corey Lacanaria caught a 17-yard touchdown pass from Alex Malzone with 4:49 left for a 17-0 halftime lead.

Brother Rice pulled away in the third quarter, as Malzone threw a 45-yard touchdown pass to Grant Perry with 8:06 left, and Brandon Thomas scored from the 25 at the 5:31 mark for a 31-0 command.

Carman-Ainsworth held the Warriors from then on and avoided the shutout when Tyquise Jackson scored on a 35-yard run with 2:06 left in the game. A run for a two-point conversion failed.

Lorenzo Redmond led the Cavs with 69 yards rushing on 21 attempts. Jackson and Demarion Allen each had 35 yards, with Allen getting his on seven carries. Connor Storms hit 4-of-18 passes for 65 yards. Bryant Hudson caught a 30-yard pass, and Brandon Walker had two catches for 30 yards.

Carman-Ainsworth will host Dearborn Heights Robichaud Friday. The Bulldogs, 1-2, are coming off a 28-0 win over Redford Union last week.