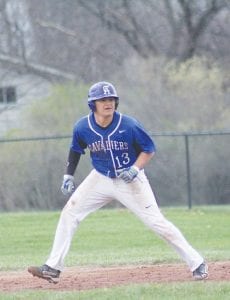 Cooper Betancourt leads off for Carman-Ainsworth.

FLINT — Taking part in Flint Kearsley’s No. 3-1 district, the Carman-Ainsworth baseball team faced off with Swartz Creek in the semifinal last Saturday, where the Cavaliers season came to an end with a 7-4 loss.

Senior pitcher Brennen Gleason was on the mound for Carman-Ainsworth and had a difficult time controlling the ball. Cooper Betancourt went 2-for- 3 with a run scored while Entrice Mitchell stroked a triple down the first baseline, one of his two hits in four at bats.

The loss was especially disappointing, considering it was the first time in 21 years that the Carman-Ainsworth baseball team ended a season with a share of the league title. Carman-Ainsworth earned a share of the Saginaw Valley League-South championship with Flushing, which won the district with an 8-0 drubbing of Swartz Creek. — B.P.