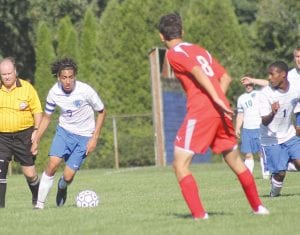 Anas Morsi looks for an opening in a game earlier this season.

FLINT TWP. — Carman-Ainsworth dropped two soccer matches to Flint Powers Catholic this past week, but got six goals better between games. The Cavaliers fell, 2-0, on Monday, after losing, 8-0, to the Chargers on Sept. 26.

Monday’s game at Carman-Ainsworth was a non-league contest used as a fillin for Southwestern Academy, which did not field a team this year. Powers scored once in each half, and Andrew Ramirez made 12 saves to keep the Cavs in the game. Carman-Ainsworth put two shots on the Chargers’ net.

The Sept. 26 game at Powers counted as a Saginaw Valley League-South Division contest. The Chargers took a 3-0 lead at halftime and ended it via the mercy rule with five second-half goals. Ramirez had six saves for the Cavs, who put four shots on the Powers goalkeeper.

Carman-Ainsworth, 3-11-1 overall and 1-3 in the league, played another Valley game at Davison last night. The Cavs will play in the league tournament Saturday. — D.N.