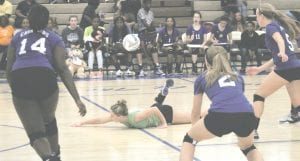 Carman-Ainsworth’s Morgan Sherrer lays out to keep the point alive, as Amaya Campbell (14) Hannah Thurston (2) and Katie Speaks (5) stand by ready for action.

FLUSHING — The season came to a close for the Carman-Ainsworth volleyball team, as the Cavaliers lost to Linden 18-25, 22-25, 19-25 in the district quarterfinal on Monday, Oct. 30.

“After losing game one, we came out strong, having a 20-9, 21-14, and 22-15 lead in game 2 with lots of momentum on our side,” said Cavaliers’ coach Barb Hurand. “Linden served and hit tough to shock us with a huge comeback to steal game two 25-22. We never gave up and continued to try to force a game four. Linden played a tough and solid match. They attacked our open spots, served tough, and earned their trip to the District Semis. They’re well coached. We can pick ourselves apart on the should-have-beens or could-havebeens, but we won’t do that. We fought hard and it was a great match.”

Linden ultimately lost in the district semifinals to Grand Blanc 3-1 last Thursday. On the other side of the bracket, Fenton defeated Flushing 3-1.

The following evening, Fenton defeated Grand Blanc 3-1 to win the district championship and then defeated Davison 3-2 in the regional semifinal Tuesday.

Fenton will take on Midland in the regional championship at Mount Pleasant tonight at 6:30 p.m.