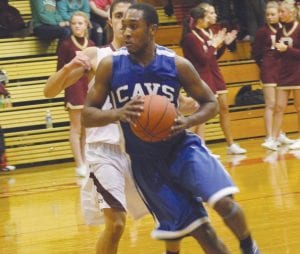 Carman-Ainsworth’s Denzel Watts drives the ball into the paint against Flushing on Friday.

FLINT — Carman-Ainsworth coach Bob Root has stated over the past few weeks that the Cavaliers have been playing great defense, but the team had to play better offensively.

Well, it seems all that preaching paid off for Root over the past week, as the Cavs defeated Saginaw Buena Vista on Tuesday, 71-48, and Flushing last Friday, 73-34.

Cameron Morse poured in a gamehigh 26 points for the Cavaliers, while Denzel Watts added 10 and Jaylen Randle and Justin Person chipped in with 10 points apiece.

The theme against Big Nine rival Flushing was much like the one against Buena Vista, as the Cavaliers jumped out to an early lead and never looked back.

Carman-Ainsworth led, 17-4, after one quarter and stretched its lead to 40- 8 at halftime. The third quarter saw each team pour in 13 points, while the Cavs outscored the Raiders, 20-13, in the fourth. 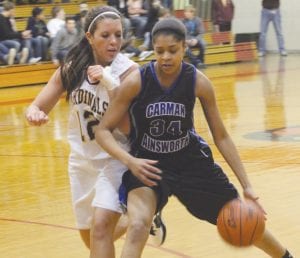 Aliah Stinnett and the Carman-Ainsworth girls’ basketball team traveled to future conference foe Saginaw on Monday, falling to the Trojans, 70-47. The Lady Cavs also fell on Friday in Big Nine action to Flushing, 63-44. Both sets of game stats were not reported by press time.

Person led the way with a game-high 19 points, Morse added 17 and Watts scored 16 in the victory. 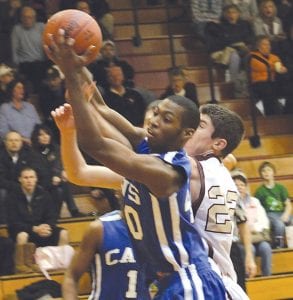 Cavalier Ishman Sims drives the paint for a layup in recent action.