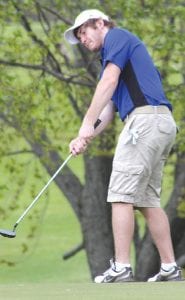 Carman-Ainsworth’s Jack Baker makes a chip shot onto the green.

DAVISON — The Carman- Ainsworth boys’ golf team traveled to the Davison Country Club on June 1 and competed in district No. 3-1.

Swartz Creek won the district with a score of 322. Other teams qualifying for the regional tournament were Traverse City West with a 324, Midland Dow with a 330, Traverse City Central with a 337, Davison with a 339 and Saginaw Heritage had a 349.

The six individual qualifiers were Devin Young of Bay City Western with a 78, Carter Adams of Bay City Central had an 80, Chaz Babin of Midland shot an 85, Ian Stevens of Alpena and Alex Wlodoreazak of Central each had an 87 and George Anganis of Midland carded an 89.

Carman-Ainsworth finished last with a score of 457. Leading the Cavaliers were Haywood Petty with a 108, Jack Baker shot a 113, Jacob Linder had a 114 and Kameron Rytlewski carded a 122.

The regional tournament is being held today at Boulder Pointe Golf Course in Lake Orion.