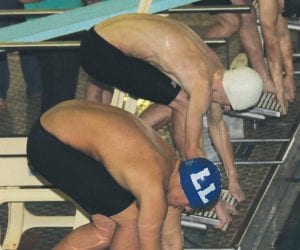 Carman-Ainsworth and Lapeer swimmers take to the blocks for the start of the medley relay race.

Midland Dow was first with 575 points. Heritage was second with 381. Bay City Western was third with 251. Bay City Central was fourth with 249. Powers was fifth with 199. Davison was sixth with 162. Midland was seventh with 126 and Lapeer was eighth with 76.

Tyler Pangerl was named to the league’s honorable mention list after finishing tied for 67th individually with three other swimmers. Connor Heaton, Vlad Li, Zach Sheely and Dorothy Dollinger finished in 4:55.38 in the Class B 400 relay finals.

Clayton Johns, Wyatt Pangerl, Carson Koegel and Brennan Robertson were seventh in the 200 medley relay A final in 2:01.56.