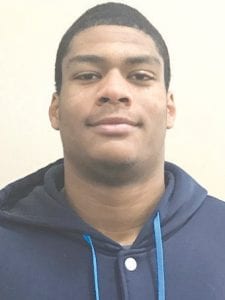 FLINT TWP. – Michael Fletcher, a three-star defensive end from Carman- Ainsworth, committed to continue his football career at Michigan State University this past Friday at Carman- Ainsworth High School. Fletcher, who will be a senior this season, was an Associated Press Division 1 All-State selection last season, recording 11.5 sacks to help lift the Cavaliers to the playoffs.

After considering offers from other top colleges including Michigan, Alabama, Georgia, Kentucky, Wisconsin and Nebraska, Fletcher settled on Michigan State mainly because of its fast and aggressive defense. Kentucky was a close second in the running but giving his family a chance to see him play in college was another big reason Fletcher chose the Spartans in the end. Fletcher noted his relationship with Michigan State head coach Mark Dantonio and defensive line coach Ron Burton helped sway his decision as well.

“Thank you, God, for putting me in this position,” wrote Fletcher in a Twitter post on Friday. “I’m very humbled to be blessed and highly favored. Thank you everyone who has helped me get to where I’m at. Me and my family talked and have supported me throughout this whole decision. After long nights and prayer, I’ve come to a decision. Very excited to announce my commitment to Michigan State University.”

Fletcher has remained hard at work in the offseason to improve all aspects of his game and become a dominant force on the gridiron in the coming season. Carman-Ainsworth’s first football game is slated for August 23 at Port Huron with its first home contest coming September 7 against Davison.