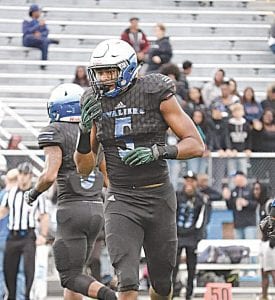 FLINT TWP. – Michael Fletcher, a senior at Carman-Ainsworth High School, signed his national letter-of-intent to continue his football career at Michigan State University during a signing ceremony at the school last Wednesday.

Fletcher considered over 20 schools but ultimately settled on Michigan State over Kentucky, Alabama and Nebraska because of the atmosphere of the school as well as his relationship with the coaches.

During his sophomore and junior seasons, Fletcher tallied 19 sacks, including 11.5 in his junior season. This season, Fletcher finished with 62 tackles, five sacks and one interception after having moved to linebacker earlier in the year. His efforts earned him an All-State Honorable Mention nod following the season.

“Reminds me of William Gholston. Great athlete who has power and can run as an excellent pass rusher,” remarked Michigan State University football coach Mark Dantonio of Fletcher in a Twitter post.

Fletcher was sure to express his gratitude for all of the help his family gave him to help give him get to where he is today.