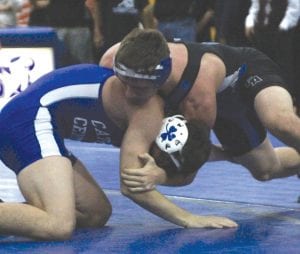 Jake Weissend (top) was unscored upon as the 145-pound champ at the Genesee County Invitational at Davison last Saturday.

Tae Pendleton was second and Jerron Thomas fourth at 171, Devon Schofield took fourth at 215 and Cameron Martin also placed fourth at 140, as the Cavaliers totaled 153.5 points to end fourth in the 23-team field. Davison won its 10th county title in 14 years with 288 points.

Winning fifth-place medals were Malik Dawkins at 112 and Aaron Dupree at 119. Wesley Cummings was sixth at 119, Shaq Polacek took eighth at 135 and Erik Thomas was eighth at 189.

Weissend was unscored upon in his four matches at 145, pinning his first two opponents and winning, 9-0, in the semifinals. He capped the long day with a 17-0 technical fall in the championship final against Mitch Franklin of Birch Run.

Pendleton also reached the championship finals, where he dropped a 5-0 decision to C.J. Melton of Lapeer West. Martin, Thomas and Schofield reached the consolation finals, with Schofield dropping a tight, 4-3 match to Tyler Satkowiak of Linden.

In a Dec. 14 dual meet, Carman whipped No. 1 Detroit Catholic Central’s B team, 47-24, at home. Dominic Doak started it with an injury default victory at 160 pounds, after he had built a 6-2 lead. After a Catholic Central decision at 171, Pendleton took a 5-3 win at 189 to give the Cavs a 9-3 lead.Catholic Central followed with a pin at 215 and a disqualification victory at heavyweight to go ahead, 15-9.

Carman-Ainsworth will wrestle in the Montrose tournament next Tuesday.