Cavs gear up for regional meet 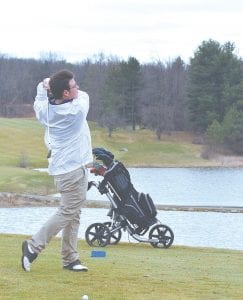 Carman-Ainsworth’s John Karbowski watches his tee shot during a meet against Lapeer and Davison on April 25.

MIDLAND – The Carman- Ainsworth boys’ golf team will have its hands full during next Thursday’s Div. 1 golf regional at Currie Municipal Golf Course in Midland. Teams need to finish within the top three of their respective regionals to qualify for the state tournament. The top-three individuals not on a qualifying team will also qualify for states.

Of those teams, none are currently state-ranked, but Lapeer, Grand Blanc and Midland Dow have all put up strong numbers throughout the season. Carman-Ainsworth has finished near the bottom of all of its Saginaw Valley League tournaments so far this season, with many of the league foes it has faced this season competing right alongside it next Thursday.

John Karbowski, Lucas Bostwick, Jalen Stewart, Aaron Carter and Nathan Ratynski will all represent the Cavs during next week’s regional.