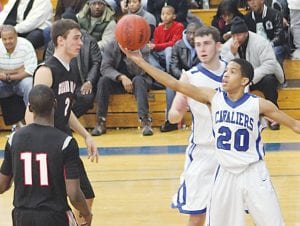 Carman-Ainsworth’s Justin Person pulls down a rebound against Grand Blanc on Tuesday.

FLINT — The Carman-Ainsworth boys’ basketball team lost its season opener to Grand Blanc on Dec. 6, 55-49. The Cavs were without star point guard Denzel Watts, while the Bobcats were without big-man, Bart Williams.

Both teams were at full strength this time around and Watts led his Cavaliers to a 65- 54 victory on Tuesday at ‘The Gravel Pit.’

Carman-Ainsworth jumped out to an early lead, 16-7 after the first quarter, but Grand Blanc closed the gap by out-scoring the Cavs, 16-9, in the second and trailed, 25-23, at the break.

The Cavs came out after the break and extended their lead with a 17-15 edge in the third quarter and put the game away with a 23-16 advantage in the fourth quarter.

Watts scored 17 points and added three steals to lead the Cavs, as Cameron Morse added 16 points and Justin Person came through with 15. The Bobcats were led by Williams and George Margaritis with 13 points each while Clarence Turner added eight.

“Carman simply wanted the win more than we did and outworked us in the fourth quarter,” said Grand Blanc coach Chris Belcher.

Carman-Ainsworth played host Flint Northern in the Coca-Cola Classic on Dec. 28 and fell, 59-53. The Vikings jumped out to a 20-12 lead after the first quarter, but the Cavs closed to within two at the break, 32- 30.

Northern again outscored the Cavs in the third quarter, 15-14, and finished the game on a 12-9 run.

Jaylen Randle led the way with 17 points, while Person came through with 15, Morse had 14 and Watts only scored five.