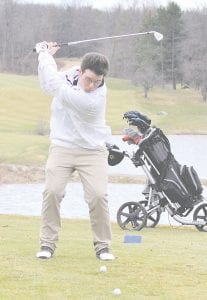 John Karbowski of Carman-Ainsworth takes his swing during a meet on April 25.

MIDLAND – The Carman-Ainsworth boys’ golf team placed 19th with a 481 at last Thursday’s Div. 1 golf regional, held at Currie Municipal Golf Course in Midland. Lapeer won the regional title with a 327 and was followed by Traverse City West in second with 328 and Grand Blanc in third with a 331, defeating Midland Dow in a fifth-person tiebreak.

Only the top-three teams and top-three individuals not on a qualifying team punched their tickets to the Div. 1 state finals, held tomorrow and Saturday at The Meadows at Grand Valley State University.

Carman-Ainsworth was led by John Karbowski, who finished with an 88. Nathan Ratynski finished with a 129, Jalen Stewart a 131 and Lucas Bostwick a 133.