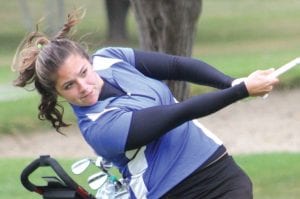 Carman-Ainsworth’s Meghan Borgerding was the lone golfer from her team to qualify for the state meet this weekend at Forest Akers West at Michigan State University.

PORT HURON — The Lady Cavaliers’ golf team made the trip to Port Huron Golf Club on Wednesday for regional No. 5-1, hosted by Port Huron Northern. Carman-Ainsworth was unable to qualify for the state meet as a team, finishing 16th with a 453. Meghan Borgerding, however, qualified individually with a third place finish, shooting an 84.

“It was awesome,” said Borgerding. “It was nerve racking at the beginning. I wouldn’t look at the scoreboard at all. Then I heard word that I might have to go into a playoff so I began putting again. So then I was putting for 20 minutes until I heard word that I qualified. I’ve been trying for three years. My sophomore year I lost in the second round of a playoff to go to states. So, it’s awesome to finally get the experience to go once in my high school career.”

Mikaila Garrison recorded a 108, Alanna Gleason shot a 127 and Madison Cox added a 134.

“I went and played a practice round yesterday and its one of the toughest courses I’ve played but I don’t know (what to expect),” added Borgerding. “I only know the talent of the girls around here so I don’t know what all I’m expecting but I’m going to play my best. I think it’s going to take just being smart out on the golf course and not trying to make shots that aren’t logical and just play for par and be smart out there.

“Especially being second from Carman (Ainsworth) to ever qualify. It feels awesome to be a part of that elite group that gets to go.”

Borgerding will compete in the Div. 1 state finals at Michigan State University on Friday and Saturday. — B.P.