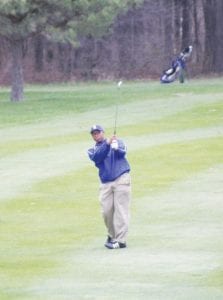 Carman-Ainsworth’s Kyle Fluker hits a long iron from the fairway.

MIDLAND – Carman-Ainsworth saw its golf season come to an end May 21 in the Div. 1 district tournament at Currie West Golf Course.

The Cavaliers shot 450 to finish 12th in the 12-team field. Only the top six teams and top six individuals not on those teams advanced to the regional today at Davison Country Club.

The top three teams and top three individuals not on those teams will move on from the regional to the state finals June 6-7 at Forest Akers East on the campus of Michigan State University.