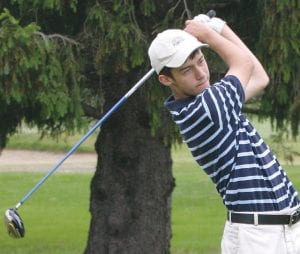 Tony Mattar shot 83 in his final high school round.

FLUSHING — Tony Mattar would have preferred a better finish to his high school golf career, but the Carman-Ainsworth senior still went out on a respectable note.

Mattar carded 83 in the Div. 1 regional last Thursday at Flushing Valley Country Club, tying for 42nd in the 72-man field in his second regional appearance. He shot 88 as a sophomore at Boulder Pointe.

“I just couldn’t get the ball in the hole today,” he said. “I got robbed a couple times, but I still didn’t play good enough to make states anyway.”

The top three teams and top three individuals not on those teams advanced to the state finals this Friday and Saturday at Oakland University. Mattar was 10 strokes off the final individually qualifying score.

He had no birdies on his card but said he just missed four birdie putts toward the end. He bogeyed the last hole when a shot into a bunker left him with a fried-egg lie.

“I just never play well on the course, for some reason,” he said. “The greens are small, and today they were really firm, so it was hard to stay on the green. But then when you got there, they were really slow, so it was just a bad combination, at least for my game.”

Mattar was easily Carman’s best player this year and one of the best in the Big Nine Conference, averaging about 40 for nine holes.

“I really should be in the 30s,” he said. “But I got to regionals and I got All-Big Nine, so I’m not complaining.”

Mattar will go on to Western Michigan University, but won’t be playing golf. He’ll study music.

“He was a good student and a good kid. It was a privilege to coach him,” said Carman-Ainsworth coach Bob Blaylock, who will be sorry to see him move on. “It’s tough, having coached somebody for four years like that. He becomes more like a son to you. He was a class act.”