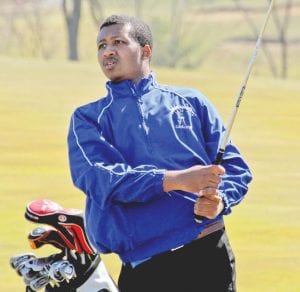 METAMORA – A larger field made for tougher competition in the 25th Lapeer Tune-up golf invitational last Friday, and the always challenging Metamora Golf and Country Club course didn’t make it any easier for players involved.

Throw in a bone-chilling start in 40-degree weather and golfers faced a stiff opening test in what is typically the first competition of the season for most of them.

Utica Ford survived the conditions and a close battle to win the team title with a 329 team total, two strokes better than defending champion Goodrich. Flint Powers Catholic was third with 332.

The tournament field was nearly double the size of last year’s 13-team, 65-player event, with 120 boys on 20 teams swarming over the 6,363-yard Metamora layout. That meant 30 foursomes on 18 holes, which made play predictably slow.

“It’s moving slow, but it’s a tough course, especially when the kids are starting out for the first time this year,” said Lapeer coach and tournament director Steve Stearns. “It’s tough. There are some younger kids and there are a couple of blind shots where they get up there and realize the ball is in the water.

“And the greens are always tough here. It’s a tough test of golf.”

Based on last year’s 13-team field, Stearns had expanded this year’s field to include a sixth man on every team, a departure from the usual five-man lineup for invitationals. But seven more teams signed up this year.

“I didn’t know originally that we’d have a big field,” said Stearns. “It kind of snowballed. By the time we figured out and counted the teams, it was 20 and we had to stop. We probably could have had a couple more.”

Stearns acknowledged that the large field likely had some effect on play, but overall was pleased with the new format.

“You’re going to have to wait on shots,” he said. “It’s hard to get anything going when you have to wait constantly.”

Carman-Ainsworth also played on April 13, falling to Holly 72-214 in a non-league match at Fenton Farms. Floyd shot 48, Fields 53, Karbowski 56 and Vanderhyde, Macko and Rytlewski 57 each.