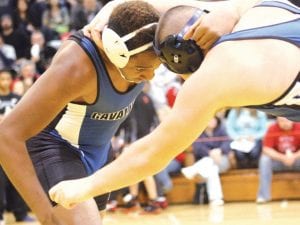 DAVISON — Amidst 14 different weight classes at Davison individual district No. 2-1 last Saturday, the Carman-Ainsworth varsity wrestling team was able to qualify seven athletes for regionals this Saturday at Saginaw Heritage No. 2-1.

The jewel of this crown for the Cavaliers was Tay Pendleton winning the 189 lb. championship by following his first-round bye with victories over Grand Blanc’s Nathan Angliss at: 33, Midland’s Terrance Thomas, 9-3, and Port Huron Northern’s Jordan Corby, 7-3.

Heavyweight Jerron Thomas wasn’t far off that pace for Carman-Ainsworth in the second spot by rolling through Alpena’s Aistin Hawk at 1:58, Flushing’s Dustin Dowen at 2:38 and losing to Port Huron Northern’s Guy DiCicco by disqualification after getting a bye for round one.

Darion Vaughn was the Cavs’ other secondplace performer at 130 after turning his opening-round pass into victories at :11 against Saginaw’s Tyler Brewen and a 21-6 technical fall against Midland Dow’s Cody Graham prior to falling in the championship match to Port Huron Northern’s Kevin Nguyen, 17-0. Herbie Keskes continued his postseason run for Carman-Ainsworth by coming in third at 171 with wins against Flushing’s Travis Kagey at 5:40, Port Huron Northern’s Matt Quaine by major decision, 9-0, and Swartz Creek’s Robert Tucker at 2:46. Malik Dawkins also finished third for the Cavs at 140 after getting issued a round-one pass, pinning Midland Dow’s Austin Riem at 1:36 and beating Saginaw Heritage’s Jared Kiefer, 5-2, and Alpena’s RJ Centalia by major decision, 14-1.

Coming in fourth at 152 was Dmario Blue after getting the better of Midland Dow’s Erik Partio, Saginaw Heritage’s Rolland Murry III at 2:19 and Grand Blanc’s Zach Reynolds, 7-4. Demetric Hall finishing fourth at 103 by defeating Saginaw Heritage’s Marco Deleon by major decision, 9-0, Grand Blanc’s Cameron Rush by technical fall, 19-4, and drawing a bye for the opening round.

At Swartz Creek team district No. 111-1 on Feb. 6, Grand Blanc led Carman-Ainsworth by as many as 16 points before losing its last three matches and getting eliminated, 35- 34. Once heavyweight Brandon Marable fell to the Cavaliers’ Devon Schofield in 4:52, the Bobcats won four straight bouts, including Nathaniel Fleming’s pin at 119 against Larry Dunn II at 3:27 and Dward Kue’s 19-9 decision over Demetric Hall at 112. With Grand Blanc’s Noah Gonser winning by void at 103 and 125-pounder Jacob Carley pinning Aaron Dupree at 4:40, Carman- Ainsworth’s Vaughn finally was able to stem the tide at 130 by downing Kyle Adams at 3:30.

What that led to was the Cavs’ Malik Dawkins winning at 2:30 against Robert LaGrech at 140 sandwiched between losses by decisions of 7-1 and 9-4 at 135 and 145 by Shaquel Polacek and Lucas Schutt, respectively.

The Cavaliers also defeated Swartz Creek, 76-6, on their way to winning this title. Team regionals began yesterday for Carman-Ainsworth in the semifinals against Saginaw Heritage, the winner of Flushing district No. 110-1.