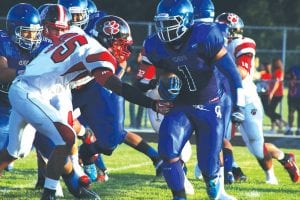 Carman-Ainsworth’s Malik Seales (1) carries the ball against Grand Blanc in the season-opener.

SAGINAW TWP. — Carman-Ainsworth got its offense rolling in the second week of the season and the defense continued to score points, as the Cavaliers routed Saginaw Heritage, 49-20, in a Saginaw Valley League crossover game last Friday.

Seven different backs contributed to the rushing game, and Jevonte Alexander scored two more touchdowns on defense, as the Cavs scored the last 27 points of the game to pull away. They had just one offensive touchdown in their season-opening, 13-0 win over Grand Blanc.

Heritage jumped ahead, 14-0, in the first seven minutes, but Carman-Ainsworth began its comeback with Connor Storms’ one-yard touchdown run with 1:15 left in the first quarter. Storms added the first of his five extra points.

The Cavs took control in the second quarter with two touchdowns just 1:19 apart. Nate Williams ran in from the two-yard line at 8:20, and Lorenzo Redmond scored from the four at 7:01 for a 22-14 lead. Heritage scored as time expired in the half to pull within 22- 20.

It was all Carman-Ainsworth in the second half. Jerron Thomas scored on a 37-yard fumble return with 6:43 left in the third quarter, and Brandon Walker caught a 14- yard touchdown pass from Storms at the 2:28 mark. Alexander returned a fumble 35 yards for a touchdown and a 42-20 lead with 11 seconds left in the period. Alexander capped the scoring with a 58-yard interception return in the fourth quarter, his third defensive touchdown of the season and second pick-six.

Walker caught two passes for 33 yards, while Bryant Hudson made a 20-yard catch and Amir Jackson had a 15-yard grab. Storms was 6-of-13 passing for 102 yards.

Brian Cole led Heritage with 152 yards and a touchdown on 27 carries, and an 80-yard touchdown pass to Jalen Adams.