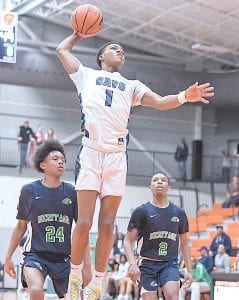 Carman-Ainsworth’s Jayden Nunn rises up for a dunk during the fourth quarter of the Cavaliers’ first round win on Monday. Photo by Todd Boone

FLUSHING — The Carman- Ainsworth boys’ basketball team opened the Div. 1 district playoffs with a 68-54 victory over Saginaw Heritage in Monday’s opening round.

The Cavaliers led 17-14 after the first quarter and extended its lead to 36-27 by halftime. Both teams scored 12 points in the third quarter before Carman-Ainsworth closed the game on a 20-15 run in the final frame.

The two remaining teams will fight for the district championship tomorrow at Flushing at 6:00 p.m.