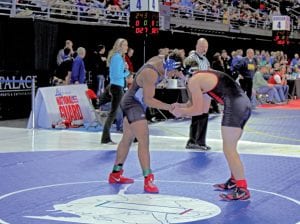 AUBURN HILLS – Ronald Roland won his first match in the Div. 1 individual state wrestling finals at the Palace of Auburn Hills last week but lost his next two to bow out of the tournament.

The Carman-Ainsworth junior was making his second straight appearance in the state finals, both at 215 pounds, and came out of it with the same 1-2 record in the Thursday-Saturday tournament.

This time he won his opening bout 7-5 over Jalen Goudelock of Clinton Township Chippewa Valley. Roland then lost to Livonia Franklin’s Josh Retting TB-1, 6-3 to drop into the consolation bracket, where he lost to Monroe’s Zach Kramer 7-5.

Roland finished his season with a 50-15 record.