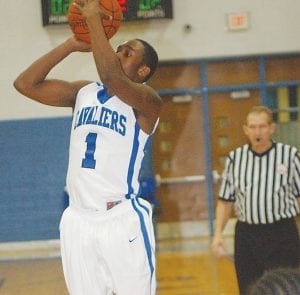 FLINT TWP. — Carman-Ainsworth picked up a few more points in the state poll and a ton of respect around the Flint area with a 62-57 basketball victory over Powers Catholic last Friday.

Three weeks after a 14-point loss at Powers, the Cavaliers hung with the fifth-ranked Class B Chargers throughout the first half and beat them, 34- 26, in the second half to forge a tie for first place in the Big Nine Conference. Both teams are 4-1 with one game to play.

The Cavs are 13-4 overall, which has earned them honorable mention status in the Class A poll. They have beaten two other state-ranked teams— Saginaw Buena Vista and Bridgeport— as well as perennial power Clarkston.

The Cavs stepped outside the league Tuesday night and won a low-scoring contest at Flint Southwestern, 46-32. The Cavs led, 13-8, after one quarter and 27-21 at halftime. They didn’t put it away until a 13-4 fourth period. Wilson led this one with 16 points and Watts scored 12.

Carman will take a six-game winning streak against Swartz Creek next Tuesday in another non-league game. The Cavs can clinch at least a share of the Big Nine title with a win at Davison on Feb. 25.