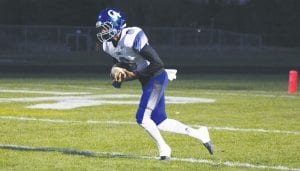 LAPEER – Carman-Ainsworth lost a football heartbreaker to Lapeer for the second straight year last Friday, falling to the Lightning 21-14 on a last-minute touchdown at Fitzpatrick Field.

The Cavaliers, the only team to come within 20 points of Lapeer the last two regular seasons, twice came from behind to tie the Lightning and twice had the ball in Lapeer territory in the fourth quarter. The first threat ended in a missed field goal, and the second died on a fumble at the 34-yard line with about a minute left.

Lapeer then went 66 yards in two plays, the first a 56-yard pass from Eli Hunt to Tim Gabryel and the second a 10-yard touchdown run by Michael Marston that gave the Lightning a 21-14 lead.

Carman-Ainsworth drove a little bit in the final seconds, but the game ended on an interception by Gabryel with 15 seconds left. The outcome was reminiscent of last year’s 34-31 Lapeer win in overtime, in which the Lightning tied the game late in regulation. 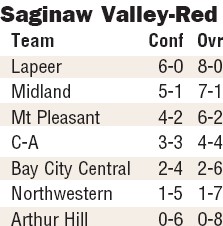 Lapeer, ranked sixth in Div. 1, improved to 8-0 and clinched the Saginaw Valley League-Red championship at 6-0. Carman-Ainsworth dropped to 4-4 and 3-3.

The Cavaliers fell behind 7-0 in the first quarter on a 53-yard touchdown pass from Hunt to Drew Rubick but tied the game on a 2-yard run by Jalen Lewis in the second quarter.

Carman-Ainsworth will conclude its regular season Friday with a home game against Flint Powers Catholic.