Cavs look to take next step in year two under Weissend 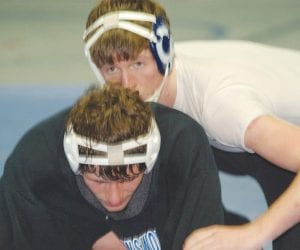 CJ Ballinger (top) and Jacob Weissend are two of the Cavaliers top wrestlers for the upcoming 2010-11 season that gets under way this week.

FLINT TWP.
— Tom Weissend returns for his second season at the helm of the Carman-Ainsworth wrestling team and has been with the program for the last nine seasons. The Cavaliers had a very respectable 19-14 overall record last season and lose only one wrestler from the lineup. Trey Cross, who was a first year wrestler last season, is the only losss for the Cavs at 189 lbs.

“We will have a lot of young guys this season,” said Weissend. “I’m not sure what to expect from this team. We need to keep the team together this season. We did well as individuals last season, but I want to improve that 19-14 record. I am still trying to piece this team together. We will be led this season by Byrd and Weissend.”

As always, the Cavs will have to compete with Davison for the top spot in the Big Nine. The Cardinals are on their way back to the top and have several ranked wrestlers this season and have a loaded freshman class coming in this season as well as next season. Flushing will be tough and has a ranked wrestler and Flint Powers rounds out the competition in the Big Nine. Davison should remain at the top of the conference with the Cavs battling with the Raiders for second place.