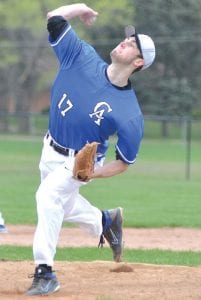 Carman-Ainsworth’s Brennon Gleason completes his windup as he delivers the pitch.

FLINT TWP. — With this being the final season for the Big Nine before the league’s four remaining teams join the Saginaw Valley Conference starting next year, the Carman-Ainsworth varsity baseball team knows it only has so many chances at grabbing a title.

Last Monday, the Cavs had a shot at working their way up the Big Nine ladder by hosting Flint Powers for a doubleheader that it ended up losing, 13-2, and, 7-3.

In that initial contest, Powers, 3- 1 Big Nine, scored five times in the fifth inning to break open a 1- 1 tie and then added seven more runs in the sixth to clock the mercy victory. Carman-Ainsworth actually got out to an early lead in this one after Jake Weissend tripled in the first and then scored on a wild pitch. Sophomore Brennan Gleason then struck out eight while getting pinned with the decision. For Powers, Ethan Wiskur gave up four hits with 12 strikeouts to earn the win.

As for the second game, the difference in this one was the Cavs’ inability to put the ball in play, which, in turn, led to Carman-Ainsworth striking out 11 times for the contest. On the mound, Colin Heaton allowed seven hits with six strikeouts for the Cavs and Chargers pitcher Brett Hresko held Carman-Ainsworth to just four hits. 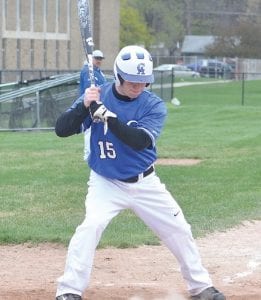 Carman-Ainsworth’s Brett Dortch watches the ball bounce in a game earlier this season.

“Tonight, Powers pitcher were better. They K’d us 23 times in DH. This was very disappointing,” said coach Tom MIller. “We have played good ball, but just can’t put the ball in play. We are in funk right now. We have had very good pitching, but no timely hits. We need a win to get us back on track. After starting out 4-1, we have lost eight straight.”

Blue Water Area Conference rival Imlay City was at Carman-Ainsworth last Thursday for a non-league game that they just barely wrestled away from the Cavs, 1-0. While the outcome may have been a bit of a letdown, that didn’t change the stellar performance given by sophomore Brennan Gleason, who gave up four hits and a walk with six strikeouts in four innings of work, before Alex Thompson came in and allowed a walk with one strikeout while pocketing the game’s final nine outs.

With Imlay City’s lone run coming in the third, one difference in the contest was the fact that Carman-Ainsworth could only muster up four hits for the contest, which came by way of Jamal Dixon, Justin Hubbard, Alex Thompson and Grant Roe. These two teams had been slated to play a second game, as well, but that matchup was called because of darkness in the third inning.