Cavs lose squeaker to No. 4 Saginaw 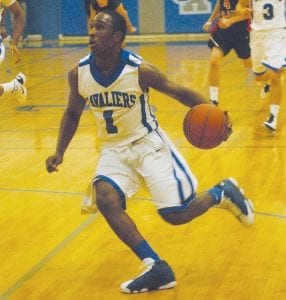 SAGINAW — Carman-Ainsworth came so close to beating Saginaw in last week’s Class A district basketball tournament, it’s hard to resist playing “what if” with the Cavaliers.

Carman lost to the fourth-ranked Trojans, 56-54, in the March 9 district semifinals at Saginaw Arthur Hill, ending its season at 17-5, with a high honorable mention ranking in the final Associated Press state poll.

But let’s say Carman had won that close game last week, and went on to play Northern in the district final. The Cavs could have avenged a 65-54 loss to the Vikings on Jan. 25, then would have gone against Bay City Western on Monday. A win there would have put them against Clarkston in last night’s regional final, and Carman beat the Wolves during the regular season. The Cavs could easily be looking at a quarterfinal game next Tuesday. 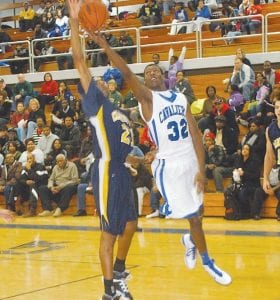 Junior forward Anton Wilson goes up for a layup earlier this season.

But that’s the stuff of dreams. The reality is that Carman threw a huge scare into Saginaw before grudgingly bowing out of the tournament.

The Cavs stormed out to a 14-6 first-quarter lead and stretched it to 20-6 one minute into the second, hitting their first four 3-point shots along the way. But Saginaw came off the ropes to outscore Carman, 22-6, the rest of the half and take a 28-26 edge into the locker room.

Carman counterpunched in the third, as Anton Wilson scored 10 of his 16 points, including an alley-oop dunk with 38 seconds left to put the Cavs up, 43-38. Saginaw scored the last five points of the period to send the game into the final eight minutes tied at 43, and the Trojans hit 9-of-14 free throws in the fourth quarter to the Cavs’ 2-of-5.

Wilson also had 13 rebounds and six steals to go with his 16 points. Denzel Watts had 21 points on four 3-pointers, and Nick Hill hit two 3s for six points. The Cavs hurt themselves at the line, going 6-for-14 for the game to Saginaw’s 12-of-19.

Tommie McCune led the Trojans with 18 points, 16 of them in the second half. Dominique Jackson had 10 points.