Cavs lose to Fenton in opening round of playoffs 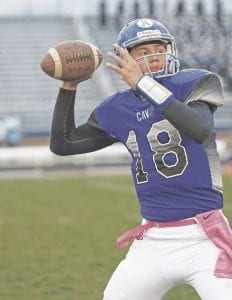 Carman-Ainsworth’s Dustin Fletcher looks down field for his target against Lapeer on Oct. 21.

FENTON — Cavs lose to Fenton in opening round of gridiron playoffs– Carman-Ainsworth’s football season came to an end last Friday at Fenton as the Cavaliers dropped a 49-19 decision to the host Tigers in the opening round of the playoffs.

Carman-Ainsworth jumped out to a quick 7-0 lead after a 44-yard touchdown run by Byron Gates just 1:37 into the contest, but Fenton retaliated by scoring four unanswered touchdowns that built a 28-7 lead by midway through the second quarter.

Carman-Ainsworth narrowed the deficit to 28-13 with 4:08 still remaining in the first half, but the Tigers struck again just before the end of the second quarter to take a 35-13 cushion into intermission.

Carman-Ainsworth’s second score of the first half came courtesy of a 10-yard pass from Dustin Fletcher to Marshall Brooks. Zack Amthor kicked the PAT on the first Carman-Ainsworth touchdown, but he was unsuccessful on his second extra-point try.

Fenton tacked on a pair of touchdowns in the second half to run the score to 49-13 before the Cavaliers completed the scoring for the evening with a 48-yard strike from Fletcher to Jakobe’ Blount.

Fenton held a narrow edge in overall offense, out-gaining the Cavs, 430 to 358, but the Tigers did not commit a turnover while the Cavs lost a fumble and threw a pair of interceptions.

Fletcher, just a freshman, completed 11-of-23 passes for 297 yards and a pair of scores. Gates picked up 109 yards and a touchdown on 11 carries. Fletcher ran for 40 yards on 16 tries. Fletcher hooked up with five different receivers on the night. Troy Brown snared four passes for 59 yards and Gates grabbed two aerials covering 77 yards. Marshall Brooks and Dwayne Gurley also hauled in a pair of passes for 16 and 7 yards, respectively. Blunt had his one catch for 48 yards and a score.

The Cavaliers, who ran off five straight wins in the middle of the 2016 campaign, finish the year at 6-4. Fenton will now move on in the Division 2 playoffs by taking on Midland Dow (9-1) tomorrow in the district title game at Midland.