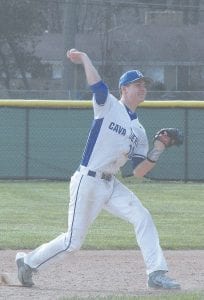 Carman-Ainsworth’s Sean Jerome throws to first base after fielding a groundball against Saginaw Heritage on Monday.

FLINT TWP. — The Carman- Ainsworth baseball team lost to Saginaw Heritage 6-5 in eight innings on Monday. No stats or details were reported prior to press deadlines.

Last Friday, Lapeer swept Carman- Ainsworth in a doubleheader, winning 1-0 and 5-0. In Game One, the Cavaliers outhit Lapeer 7-2, but still managed to tally the loss. In Game Two, Carman-Ainsworth recorded zero runs on two hits while allowing five runs on five hits to Lapeer. No other stats or details were reported prior to press deadlines. — J.O.