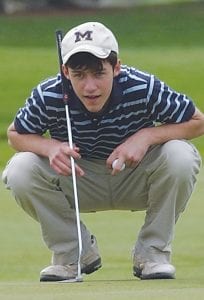 Tony Mattar shot 85 in the district.

BAY CITY — Carman-Ainsworth capped its golf season on a high note last Friday, as Tony Mattar squeezed into one of the last qualifying berths for the regional tournament.

The Cavaliers’ senior shot 85 in the Div. 1 district at Bay City Country Club to finish in a four-way tie for the fourth individual qualifying spot. Only the top six individuals not on a qualifying team move on to the regional, so Mattar had to survive a four-man playoff on the 18th hole to eliminate one of the players.

With a crowd of about 100 other players and parents watching the playoff, Mattar hit his drive into the water and took a bogey on the hole. But a Flushing player took double bogey to end the playoff.

“It was kind of fun to watch the nervousness of the kids with the crowd and all that pressure on them,” said Carman-Ainsworth coach Bob Blaylock.

Mattar was playing without sleep after graduating the previous day and spending the whole night at a lock-in party.

The regional was scheduled for today at Flushing Valley Country Club. From there, the top three teams and top three individuals not on one of those teams advance to the state finals June 17-18 at Kate-Cousins Golf Course on the campus of Oakland University in Rochester.