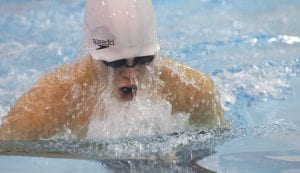 Zak Wilkins had the best time in the breaststroke, but Carman-Ainsworth/Flushing conceded that event to Arthur Hill.

FLINT TWP. — Carman- Ainsworth/Flushing won the first seven events, then exhibitioned the last five to avoid running up the score and still took an 84-43 victory over Saginaw Arthur Hill in a Saginaw Valley League swimming and diving meet last Friday at Carman-Ainsworth.

Six different Cavaliers won events, and four others were on the winning 200-yard medley relay squad that kicked off the meet, as coach Kevin McGlashen reached deep into his roster to fill out the lineup. The dual was Carman-Ainsworth’s first in its new league.

Tyler Pangerl, Patrick Sharp, Megan Owen and Evan Snyder clocked 1:56.24 in the medley relay to lead a 1-2-3 sweep of that event.

Carman-Ainsworth/Flushing had better times in all five remaining events, but conceded the points to Arthur Hill.

The Cavs now take a break from competition until Jan. 4, when they’ll swim another Valley dual meet at Midland Dow.