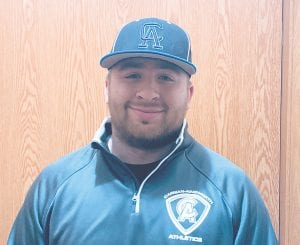 Devon Smith, a 2014 C-A graduate, will be the Cavaliers’ head baseball coach this season. Photo provided

FLINT – Carman-Ainsworth named its new head baseball coach last Wednesday, as 23-year-old Flint native Devon Smith will take over the helm for the Cavaliers in his first season of varsity experience. Last season, he was the head coach for the Cavs’ JV squad.

Smith played four seasons of varsity baseball for Carman-Ainsworth and helped lead the Cavs to a Saginaw Valley League Championship in 2014, while also playing travel ball for Foutch’s and Grossi. After graduation, he went to a few tryouts for the Mott Community College baseball team, but ultimately decided to focus on his studies.

“The biggest philosophy that I want to implement is becoming a family program,” said Smith. “There was a lot of great history when I played at Carman-Ainsworth. We were brothers. We struck together. A lot of us still come together now even after years from graduation. The biggest thing is playing together, having fun, having a big love for the game and just going out there every pitch, every play together. Hopefully, that will lead to a successful season for us this year.”

Even with his young age, Smith has a wealth of baseball background and is assured in his ability to lead the Carman-Ainsworth program.

“No, no that’s not a concern of mine at all,” said Smith when asked about age. “I am very confident in my knowledge that I have of the game, as well as the help that I’ll receive from my staff this year. The kids that are there now know me and respect me. They understand my knowledge of the game, and all that I’m looking to do is pass it on to them. I’m not going to let my age or anything like that affect my coaching style going into the season.”

One could even say he has baseball in his blood, as Smith’s grandfather, James Smith, worked as a scout for the Philadelphia Phillies for 16 years.

“After he stepped away from [scouting], he managed the team in the Stan Musial AABC [World Series] here in Flint,” said Smith of his grandfather. “I started being the batboy for his team, then in 2003 I joined Halo-Foutch [another amateur baseball team] and was a batboy for them. In 2005, I was with the team when they won the AABC National Championship…So, I’ve been around baseball ever since I could walk, really.”

With snow on the ground and the season still months away, Smith’s first Cavaliers team is still in flux with an unset roster.

“It’ll be a rebuild,” said Smith of his prospects of the upcoming season. “There are several players that I’m familiar working with at the varsity level [from] last year. As far as kids coming up from the JV, it’ll depend on how much work they put in during the offseason and what I see during winter workouts this year and coming into the Spring. All in all, in my opinion, my roster is open to anyone that proves that they are worthy enough to be a varsity player. And that goes the same for the returning varsity players. They’ve got to prove to me that they understand the concepts of the game and that they want to play together as a family.”