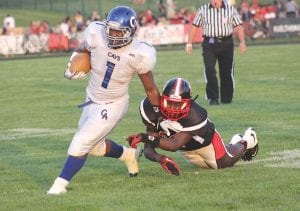 FLINT TWP. — The last time Carman-Ainsworth saw Grand Blanc on a football field, the sun was blazing on a warm summer evening, the Olympic Games had just ended and Grand Blanc Olympian Geena Gall was tossing the pre-game coin flip to kick off the season.

That was Aug. 24. Things will be considerably different this time, with the game at Carman-Ainsworth Junior High on a cold, dark, possibly rainy night and much more at stake than a non-league game. The two former Big Nine Conference rivals will clash at 7 p.m. Friday in a first-round Div. 1 playoff game.

The Cavs hope the outcome is the same as nine weeks ago, when they ambushed the Bobcats with 20 points in the first half and went home with a 27- 12 victory. Carman-Ainsworth went on to finish 8-1 in the regular season, climbing as high as No. 3 in the state polls and losing only to No. 1 Div. 5 Flint Powers Catholic. Grand Blanc finished 5-4, one of only four 5-4 teams to make the Div. 1 field.

Carman-Ainsworth built its best regular season record since 1999 on the speed of several players. Opponents simply cannot contain the likes of running backs Gerald Holmes, Malik Seales and Lorenzo Redmond and receivers Demarion Allen, Brandon Walker and Jevonte Alexander. Junior Connor Storms has been directing the traffic from quarterback and has the Cavs scoring at a 40-points-per-game clip.

The defense is allowing less than 10 points a game, with four shutouts, and again will have to contain the passing of Grand Blanc quarterback Bart Williams. The Bobcats are averaging nearly 30 points a game and bombed Plymouth, 34-6, last week to get into the postseason.

This will be the second time Grand Blanc and Carman-Ainsworth have met twice in one year. In 2006, the Cavs took a 30-22 regular-season victory, then beat the Bobcats in the playoffs, 21-6.

The winner will play the winner of the Davison-Clarkston game for the district title next week. Clarkston is 9-0 on the season.

Carman-Ainsworth closed its regular season last Friday with a 49-28 win over visiting Davison to finish 5-1 in the Saginaw Valley League. Seales ran for 151 yards and a touchdown on just 11 carries, and Gerald Holmes carried 12 times for 96 yards and two touchdowns. Storms hit 4-of-7 passes for 140 yards and two scores, as the Cavs totaled 399 yards, 259 on the ground.

It was 21-0 after one quarter, as Alexander scored on a 65-yard pass from Storms, Holmes scored from the 31 and Seales went in from the seven. Davison scored in the second quarter, but the Cavs countered with Holmes’ five-yard touchdown run and Redmond’s one-yard plunge for a 36-7 halftime lead.

Walker scored both second-half touchdowns for Carman-Ainsworth, on a 52-yard pass from Storms in the third quarter and an 80-yard kickoff return in the fourth.