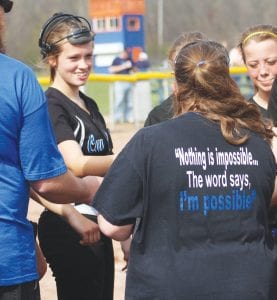 The Cavs face a tough task in the district, but as coach Joy Roe’s shirt says, ‘Nothing is impossible …’

FLINT – Carman-Ainsworth would have had a tough game no matter who it drew in the first round of the Div. 1 softball district at Flint Kearsley.

As it is, the Cavaliers got their easiest possible opponent on paper, drawing Swartz Creek for a semifinal game at 10 a.m. Saturday. Flushing will play host Kearsley in the other semifinal at noon, with the championship game at 2 p.m.

Swartz Creek is down considerably this year compared to its last two seasons, when it went 62-14. The Dragons bring a 14-16 record into the district and a sixth-place finish in the Metro League at 8-8.

Carman-Ainsworth comes in at 2-14 and a slim chance to beat Creek, its neighboring rival. The Cavs likely won’t see the Dragons’ ace pitcher, Carah Pletscher, who has pitched very little this year because of a shoulder issue. Phoebe Cross has been tough as the No. 2 hurler, but the Creek defense has let in some unearned runs.

Flushing comes into the district at 14-9, including a 12-6, 18-0 sweep of Carman-Ainsworth in a Saginaw Valley League-South doubleheader on April 24. Kearsley went 9-7 in the Metro League, a step above Swartz Creek.

The district champion will advance to the Saginaw Heritage regional June 7 to play the winner of the Traverse City West district.