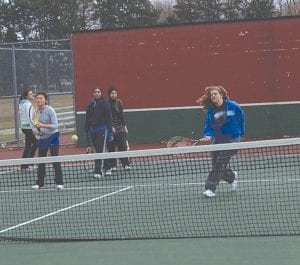 Carman-Ainsworth tennis players did some early-season hitting in March.

FLINT TOWNSHIP — The youthful Carman-Ainsworth girls’ tennis team is revamping and trying to emulate some of the success it saw last year. A 3-3-1 season a year ago was good enough to earn the squad a share of second place in the Big Nine Conference with Flint Powers Catholic, only falling short of conference champion Flushing.

With the loss of seven seniors, including the Big Nine’s top ranked singles player Veronica Garza, the Cavaliers are looking to fill the void left by graduation. The numbers game is looking good for Carman- Ainsworth, as 17 girls are fighting for a varsity spot, and 30 others are trying to make the JV roster.

Returning co-captains Mariam Salman and Afrah Asiam, along with Hailey Hutchins and Taylor Kost, are all vying to be the team’s top singles positions, but the continued inclement weather that has kept teams in the gyms and auditoriums has put them all a little behind.

“The next step is for them to do competitive matches to determine the final singles lineup for the season,” said coach Bob Chunn. “I have 12 girls battling for eight doubles positions.”

“I believe we’re going to do at least as well as last year,” said Chunn. “However, it’s kind of up in the air until we see the competition.”

Weather has delayed the Cavaliers’ season, but they hope the trend will change when they return from spring break for a match with the Clio Mustangs on Wednesday, April 13 at 4 p.m. at Clio.