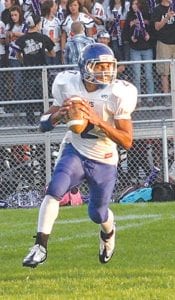 Shane Barron has played his final high school game and likely will play for a Div. I college next year.

MIDLAND — Carman-Ainsworth got an early taste of what football will be like in the Saginaw Valley Conference.

The Cavaliers met Valley stalwart Midland in a Div. 1 playoff game last Friday and suffered a 42-12 defeat in the firstround contest. The Cavs’ season ended at 6- 4, while the sixth-ranked Chemics, 9-1, advanced to a second-round game at Grand Blanc this Friday.

Carman and the other three Big Nine Conference teams will move into the Valley next fall, so the playoff game was a good measuring stick of what’s to come. The Cavs won the final Big Nine championship this year but, at least on this night, couldn’t stay with the Valley runner-up Chemics.

Carman took a 3-0 edge early on Connor Storms’ 33-yard field goal, but that was the Cavs’ only lead of the night. Midland took the lead for good at 7-3 on T.J. Wilson’s one-yard run and Garrett Wallen’s point-after kick.

Storms drew Carman within 7-6 with another first-quarter field goal, this one from 37 yards. But Midland started pulling away with two second-quarter touchdowns. Avery Chatman’s 11-yard run made it 14-6, then Alex Goodwin blocked a Carman punt to set up Wilson’s four-yard run for a 21-6 halftime command.

The most damaging blow came on the second-half kickoff, which Chatman returned 95 yards for a touchdown and a 28-6 lead.

Shane Barron answered with a 75-yard touchdown run to make it 28-12, but Midland came right back with a seven-yard touchdown pass from Paul Lynch to David Walter for a 35-12 lead going into the fourth quarter.

Wilson capped the scoring with a two-yard run early in the fourth, his third touchdown of the night.

Barron led the Cavs with 95 yards rushing on 10 carries, and Gerald Holmes added 48 yards on 11 attempts. Barron also hit 3-of- 12 passes for 89 yards. Storms, who was being groomed all season as Barron’s successor at quarterback, hit 2-of-3 for 66 yards. Brandon Walker had two catches for 96 yards.