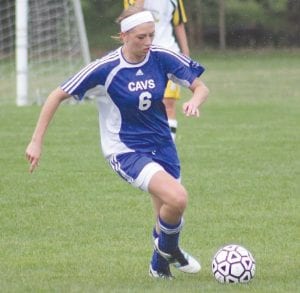 FLINT TWP. — The Carman-Ainsworth girls’ soccer team’s season came to a end after getting ousted from the No. 15-1 district at Davison Tuesday, 3-1, by Clarkston.

Clarkston put up a 2-1 first-half lead that it never relinquished, tacking on an insurance goal in the second half.

Jasmine Jones scored Carman-Ainsworth’s lone goal and Shelby Marsh assisted. In goal, Savannah Lacey made 12 saves. Flushing shut out Oxford, 4- 0, to move on against Clarkston today at 5 p.m. in the semifinals.

Grand Blanc, also in the district, has been an area soccer power over the years and Davison knew it would be in for a fight in its district opener. Both teams battled back-and-forth in the first half with neither team able to find the back of the net.

The Bobcats would break the deadlock and score from 35 yards on a goal by Ainsley Stiff, assisted by Kara Huber. With about eight minutes left in the game, Annie Walker would put the game out of reach on a pass from Nichole Boehnke. Rebecca Turvene made two stops in net to pick up the victory for Grand Blanc.

The game was affected by the strong wind and the sun constantly in the eyes of the players.

“Defensively, (we) were very organized keeping Davison from getting any good looks at goal,” said Grand Blanc coach Greg Kehler.

The Bobcats will play Lake Orion today at 7 p.m. at Davison. The finals will kick off June 2 at Davison at 11 a.m.