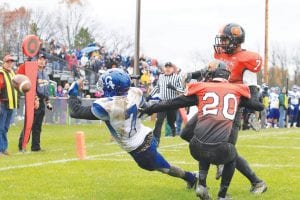 Tyler Minor (7) can’t get his hands on a pass that was batted away in the end zone on the last play of the game.

FLUSHING – Two key plays turned the momentum in the second half, and Carman- Ainsworth lost a hard-to-swallow, 28-21 decision to Flushing in a Div. 2 district championship football game last Saturday at Raider Field.

The Cavaliers led three times and seemed to have the upper hand throughout, but a 75-yard Flushing punt return in the third quarter and a Carman-Ainsworth fumble deep in its own territory in the fourth kept the Raiders in the game.

Flushing didn’t lead until 3:13 left, when Chris Triplett’s fourth touchdown of the game, on an 11-yard run, gave the Raiders a 28-21 edge.

Carman-Ainsworth had the ball the rest of the game and drove steadily down the field, starting with Caleb Ruffin’s 31-yard run. Tyler Minor converted a fourth-and-7 at midfield by running 22 yards to the Flushing 25 with 1:33 left. Jalen Lewis then carried for 14 tough yards up the middle to the 11.

Minor got 1 yard to the 10 with 41 seconds left, then was sacked back at the 19. A penalty with 15 seconds left dropped the Cavs to the 24. On fourth down from there with seven seconds left, Billy Hickey came in at quarterback and lofted a pass into the right corner of the end zone, where Minor was double-teamed and the ball was batted away.

Carman-Ainsworth’s season ended at 8-3, while Flushing, 9-2, advanced to a third-round game at Farmington Hills Harrison, 9-2, at 1 p.m. Saturday.

“It was a great high school football game that went down to the end,” said Carman-Ainsworth coach Nate Williams. “My kids fought hard. I’m proud of them. They played their hearts out.”

The first quarter was scoreless, as the Cavs’ opening drive died inside the Flushing red zone and a second possession was stalled by penalties.

Carman-Ainsworth finally took a 7-0 lead on Minor’s 37-yard run with 9:37 left in the second quarter, but Flushing tied it on Triplett’s 15-yard touchdown off a reverse at 4:55.

Flushing tied it 14-14 with 4:39 left in the third quarter on perhaps the biggest play of the game. Triplett picked up a punt on the second bounce with three Cavaliers bearing down on him, cut straight across the field to the left sideline and went 75 yards for the score.

Carman-Ainsworth regained a 21-14 lead just three minutes later on a dazzling 33-yard run by Minor, who broke two tackles near the left sideline, then put a move on the last two defenders and cruised the last 20 yards into the end zone.

With 10:25 left in the fourth quarter, Minor lost a fumble that Flushing recovered on the Cavs’ 6-yard line. Triplett scored on the first play from there to tie the game again at 21-21.

Carman-Ainsworth drove to midfield with 7:52 left but was stopped there on fourth-and-3. Flushing then went ahead with 3:13 left.

Minor finished with 206 yards rushing and three touchdowns on 19 carries, and Ruffin ran 20 times for 171 yards as Carman-Ainsworth dominated the total yardage battle 396-216.