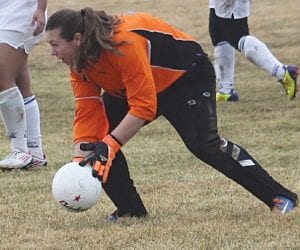 FLINT TWP. — Carman-Ainsworth coach Jessyca Matthews pulled two of her players against Flint Nothernwestern on Monday to even the playing field when Northwestern showed up with just seven girls. Two arrived late to the game, but that mattered not as the Lady Cavs routed the smaller squad and Saginaw Valley League opponent, 13-0.

Melody Bamford and keeper Rachel Roop scored twice each and Shelby Marsh rippled the mesh once and tallied five assists in the game.

Matthews used the shortchanged opponent as a golden opportunity for her squad to put into game time what they have been doing in practice, as the team, now 2-6 overall, 2-1 SVL-South, prepares to host Oakland County powerhouse Lake Orion and Saginaw Valley Lutheran in the Cavalier Classic on Saturday.

Last Friday, the Cavaliers swallowed a 2-1 loss against Owosso after Owosso’s Brittney Crawford broke the stalemate 5:09 into the second half assisted by Chelsea Michelec. Crawford also scored Owosso’s first goal. The loss was a bitter pill for the Lady Cavs, as they out-shot Owosso, 21-12. Shelby Marsh toed in Carman-Ainsworth’s lone goal. In net, Roop made four saves.

Last Wednesday after press deadline, Carman-Ainsworth faced a foe that was playing at a whole different level, falling to Mt. Pleasant, 9-1.

Mt. Pleasant gave itself a huge, 4-1 lead in the first half and tacked on five more goals in the fifth.